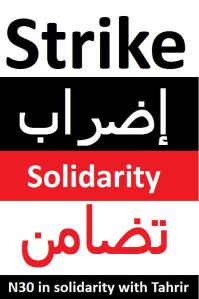 Join the campaign – Cameron’s mates sent tear gas to Tahrir. Let’s send a message from our strike to Cameron and Tantawi: hands off our brothers and sisters who are fighting for freedom!

On November 30 we will be taking strike action with millions of our colleagues to defend our pensions, jobs and public services from attack by David Cameron’s government. For many of us, this is the biggest fight of our lives. Hundreds of thousands who strike that day will never have been on strike before.

We have a simple message for the revolutionaries in Tahrir Square and workplaces across Egypt. We stand with you in the struggle for social justice, and we send our solidarity to you in the battle to end military rule.

Our Prime Minister, David Cameron, arrived in Tahrir Square a few months ago, with a gang of arms dealers in tow, to cut a deal with Egypt’s generals and profit from the repression of the 25 January revolution.

As workers we do not have tear gas, or rubber bullets, or armoured cars. But our collective power when we strike is greater than all of these combined.

So we have a simple message for both the Egyptian and British governments on 30 November: we are with our brothers and sisters in Tahrir Square. We will not stand by and let you collude in crushing their protests. When we strike for our pensions, we will also shake Cameron’s government in solidarity with Tahrir.

To add your name to this statement add a comment below or email menasolidarity@gmail.com

11 thoughts on “Egypt: Tell Cameron and Tantawi – N30 strikers are in solidarity with Tahrir”