Students and university staff played a key role in Sudan’s revolution and are continuing to organise and push for real justice and democracy, writes Dr Iman Hamza

From Middle East Solidarity magazine, issue 12. Order a print copy or download as a pdf here

El Bashir’s regime created what was called the ‘Higher Education Revolution’, which extended higher education horizontally by opening a lot of new universities with minimal infrastructure. Some of these universities were rented houses: there were no libraries, no proper lecture rooms, no offices for staff. Sometimes all the staff of the university were in one room. Even tables were lacking, or 2 or 3 people would be at one table. Staff had nowhere to sit and nowhere to contact students. Even the basic living conditions and minimum needs of students were not met.

The regime also invented a body responsible for student accommodation and assistance, but this was targeted at the students supportive of the regime who were members of the ruling National Congress Party, while other students did not receive the same benefits.

The imposition of the Arabic language on the universities prevented students from strengthening their knowledge of English as a second language. The regime introduced subjects with the aim of brainwashing students, to make them feel positive about the regime. Those subjects would take up most of the first year, thus affecting the scientific content of the curriculum. When these new universities opened, the needs of the labour market were not considered, and as a result students suffered from unemployment.

Staff were also victims of the Higher Education Revolution. They suffered poor working conditions, wages were not paid at market rates, which meant that lecturers had to work in more than one university to fulfill their living needs.

The regime and its Higher Education Ministry interfered with every aspect of university life, leaving no room for staff or the university itself to be independent. The regime sacked staff members and excluded students who opposed it. The government and the Ministry of Higher Education intervened in every detail of the curriculum while some of the subjects were geared towards brainwashing students.

There is no funding for academic research. The Ministry of Higher Education has negligible funding, and they control the topics researched. If you agree to work on those topics you will get some of this funding, but if you want to research anything else you will get nothing. Moreover, there are no rewards for the research staff whatsoever, which creates little incentive to pursue a career in research given the poor economic conditions in the sector. 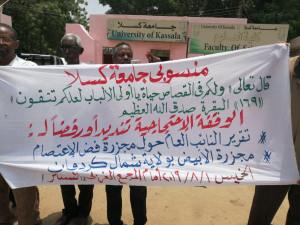 Students and staff have been organising themselves. They tried to gather and strike. They struggled greatly and have exposed themselves to the aggressiveness of the regime. Many of them are in jail. At last however, they have made some gains. All the organisations began secretly. They used WhatsApp and Telegram for meetings to avoid the violent response of the military and the security services.

It was the strikes which really got rid of the regime: they mobilised everyone. People going into streets, raising their voices and striking had a huge impact.

The deal signed by the military council which agrees to a new government with civilians is not entirely what we want. The agreement is full of faults and we still think that the military council doesn’t want justice to be achieved. Unless we keep a close eye on the agreement and scrutinise it, it might put us back again on an undesirable path. We will put on pressure to make sure the agreement leads to a democratic transition, otherwise we will go back to the streets again!

The role of all activists, and not only students and staff is to keep an eye on what’s happening and try to help in getting things in the right direction. People benefiting from the former ruling National Congress Party are still there. However, with our help and alertness, the path of the revolution will go where we want, and we will be there to correct it along the way.

Dr Iman Hamza is a leading activist in the Sudanese Association of University Teachers.

One thought on “Sudan: ‘The regime interfered with every aspect of university life’”