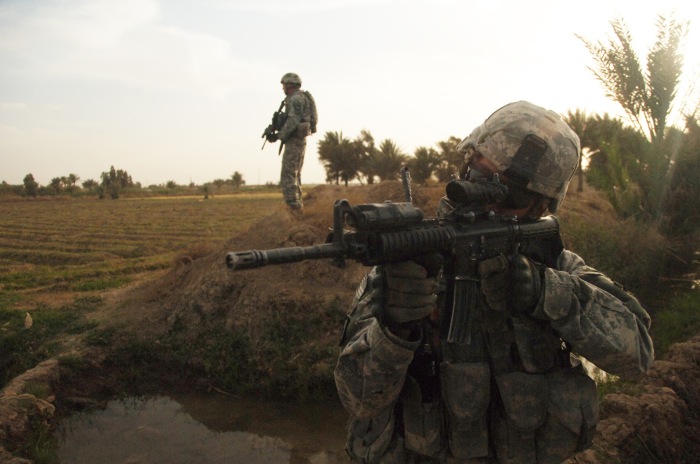 From Middle East Solidarity magazine, issue 12. Order a print copy or download as a pdf here

Iraq is the birthplace of agriculture. Its wheat, legumes and other seed crops have been developed and refined for local conditions over a period of 10,000 years.

It is also unique among Middle Eastern countries for its water resources and thus in its potential to be self-sufficient in food production. Indeed, it was up until the 1970s.

Approximately 27 percent of the country is available for agriculture – half of which is from extensive irrigation of the Euphrates and Tigris rivers.

In the 1980s, Iraq was a major agricultural market for the US, accounting for 90 percent of American rice exports and wheat exports worth half a billion dollars a year.

Oil exports and government subsidies in food products sustained conditions of food security until the early 1990s. According to a World Health Organisation (WHO) report, before the Gulf War, “calorie availability was 120 percent of actual requirements.”

Iraqi agriculture was devastated by the 1990-91 Gulf War, the ensuing sanctions and the “Shock and Awe” of the 2003 US-British invasion.

The United States began bombing Iraq in January 1991, with extensive strikes on civilian infrastructure targets. Caught in the crosshairs of the US Air Force were power generators, sewage plants, water purification facilities and the extensive canals and irrigation systems on which Iraqi agriculture depended.

Declassified Pentagon documents show that the US had studied Iraq’s water-drinking system, assessed its weakness and intentionally bombed it. After the war, the US then shaped the post-war United Nations sanctions to prevent its repair. As a result, 1990-91 agricultural output was 80 percent lower than the previous, pre-sanctions production in 1989.

Additionally, the UN Oil for Food programme (1995-2003) was prohibited from purchasing Iraqi-produced food, creating food dependency on imports. The UN sanctions were specifically designed to exacerbate hardship and to reduce Iraq’s ability to feed itself, if not to eliminate it outright.

Among the US’s primary motivations in seizing control of Iraq and creating a free market, neoliberal client state in Iraq was to extend global capital penetration into the largely closed-off Middle East via the US-Middle East Free Trade Area and to expand the American agribusiness model of corporate agriculture.

But US efforts to create the conditions for large-scale corporate agriculture have been at the direct expense of Iraqi food sovereignty.

By eliminating tariffs and other protections, the US instantly created a billion-dollar annual market for its own agricultural exports which did not exist previously under the UN sanctions regime imposed on Iraq.

US efforts to create the conditions for large-scale corporate agriculture have been at the direct expense of Iraqi food sovereignty.

Via the WTO and free trade agreements, the United States profits from forcing its own highly subsidised food onto countries that have agreed to tariff reductions and the reduction of impediments to trade. Combined with the liberalisation of Iraq’s economy to facilitate direct investment by Western corporations, this has directly contributed to destabilising food security, slashing or removing altogether the country’s farm and price support systems.

From 2003-2007, the US applied a policy of “reforming” the Iraqi state – pushing it out of the economy and imposing a radical form of free market economics. This included lowering Iraq’s corporate tax rate from 45 to 15 per cent, permitting foreign companies to own 100 percent of Iraqi assets, and for investors to take 100 percent of the profits they made in Iraq out of the country; they would not be required to reinvest, and they would not be taxed.

The Bush administration’s first working model for post-war Iraq closely mirrored World Bank and IMF policies developed over the 1980s and 1990s, with the difference being that structural adjustment would be driven by the power of American weaponry.

The implementation of this plan caused a descent into anarchy following the US invasion, beginning with looting, at an eventual cost of $12 billion – equivalent to as much as one-third of Iraq’s annual gross domestic product – and accelerating the collapse of the state.

The Ba’ath party was disbanded in May 2003. Anyone in the top four levels of the party was banned from holding government jobs, driving out the institutional memory and what was left of the state. The US strategy prioritised the danger to American power in the region posed by the Iraqi state’s coercive capacity.

Head of the Coalition Provisional Authority (CPA) Paul Bremer stated repeatedly that his most important mission was empowering the free market and shrinking the state. “Getting inefficient state enterprises into private hands,” Bremer said, “is essential for Iraq’s economic recovery.”

Once established, the CPA assumed all executive, legislative and judicial power over the Iraqi territory.

One of Bremer’s economic edicts specifically prohibited the Central Bank of Iraq from offering financing to state-owned enterprises. The CPA’s relentless focus on privatisation and creating favourable conditions for international investors in Iraq at the expense of practical, logical and moral considerations is representative of this.

The CPA’s mandate to eliminate all tariffs, duties and taxes on imports led to Iraq being flooded with foreign foodstuffs.

This created a new and substantial market for American farmers, with $190 million worth of wheat exported in the year after the invasion.

Overseeing Iraq’s agricultural reconstruction was Daniel Amstutz, noted by Oxfam’s policy director at the time as being “uniquely well placed to advance the commercial interests of US grain companies and open the Iraqi market.”

Amstutz oversaw the USAID’s Agriculture Reconstruction and Development Program for Iraq (ARDI), and quickly began to eliminate the price supports and other agricultural subsidies that Iraqi farmers had received under the government of Saddam Hussein.

ARDI was part of a political agenda within a larger US shock-therapy strategy for the Iraqi economy. Its central objective was to “liberalise” and privatise Iraq’s wheat sector. The actual work was contracted to Development Alternatives (DAI), for “the transition from a command and control production and marketing system to a market-driven economy.”

The immediate focus was on expanding Iraq’s wheat crop via high-grade imported wheat seed. Traditionally, wheat is the country’s most important crop.

However, rather than utilising Iraqi seeds that had been developed to the conditions of Mesopotamia over the last 10,000 years, or assisting Iraqis in ensuring their indigenous wheat-seed supply was protected and could be regenerated, wheat and barley seed was imported that could “theoretically” survive in Iraq.

The decimation of Iraq’s ability to replenish its own seed stocks meant that new seeds would have to be imported.

In a demonstration of astounding arrogance, seeds were selected despite the US “not knowing the specifics of Iraqi production as to soils, rainfall and/or irrigation.”

Before announcing his departure from Iraq, the CPA’s Paul Bremer issued “100 Orders” designed to transfer Iraq’s economy and legal ownership of Iraqi resources into the private hands of US corporations.

Order 81 specifically deals with Plant Variety Protection (PVP) – that is, it is designed to protect the commercial interest of corporate seeds companies.

Order 81 opened the way for patenting of plant forms and facilitated the introduction of genetically modified (GMO) crops to Iraq.

In the absence of an independent, sovereign Iraqi government to repeal this edict, the US was able to override Iraq’s original patent law of 1970, which had prohibited private ownership of biological resources.

The US did not protect Iraq’s national gene bank from post-invasion looting, with the national collection of plant genetic resources being lost, stolen or destroyed.

As a result, since 2005, Iraq has only been able to provide 4 percent of its seed requirements. The decimation of Iraq’s ability to replenish its own seed stocks meant that new seeds would have to be imported. These were in the form of wheat and barley seed developed to “theoretically” survive in Iraq by scientists from the World Wide Wheat Company (WWW).

The intellectual property rights established through the WTO’s TRIPS agreement defines genetic materials, seed plasmas, and all manner of other products as private property. Rents for use can then be extracted from populations whose practices had played a crucial role in the development of these genetic materials. WWW’s seeds would not work without dependency on pesticides, herbicides, fungicides and fertilisers readily available from Western agricultural firms Monsanto, Dow and DuPont.

Despite doubling the area sown over the project’s first three years, Iraq’s national wheat production dropped from 2.6 million tonnes in 2002 to 2.2 million tonnes in 2006. The monoculture and reduced biodiversity encouraged by GMO-based agriculture can only diminish an Iraqi environment already polluted by the detritus of the US invasion – including “depleted” Uranium dust – napalm, chemical weapons and phosphorus bombs.

Allowing ancient varieties of seeds to be genetically manipulated or otherwise modified and then “registered” under corporate ownership involves the theft of inherited intellectual property, the loss of farmers’ freedoms and the destruction of food sovereignty in Iraq.

According to a Focus on the Global South and GRAIN Report, “Iraq has the potential to feed its people. But instead of developing this capacity, Washington is shaping the future of Iraq’s food and farming to serve the interests of US corporations.”

The intent behind American efforts to revitalise Iraqi agriculture was clear: to hook Iraqi farmers on a path of corporate dependence that facilitates the consolidation of small farms into larger agribusiness entities specialising in monocrops, which can be owned and manipulated by western agricultural giants such as Monsanto and Cargill to create a dependency on Western fertilisers, tractors and carbon-intensive practices.