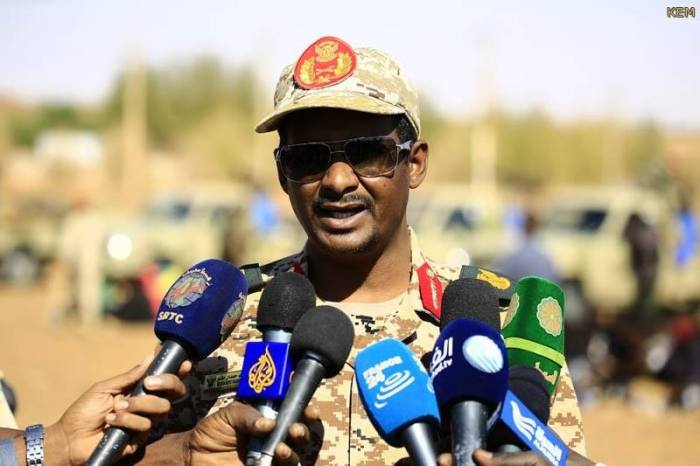 General Hemedti – from warlord to deputy head of Sudan’s junta

Attacks by Sudanese security forces and militias on peaceful protesters at the main sit-in outside the Army General Command in Khartoum have escalated in recent days. At least two people were shot dead by the military on Saturday 1 June, according to the Sudanese Doctors’ Central Committee, following the killing of three further protesters, including a pregnant woman, last week. Sudanese army and militia leaders have threatened to use force to clear the sit-in, accusing the demonstrators of violence. The Sudanese Professionals Association hit back at the military’s claims in a statement: “We hold the TMC accountable and responsible for the crimes of the previous days. And we warn of the dangers of any further military escalation or any attempts of attacking the sit-in. The TMC intransigence and insistence on military nature of the sovereign authority during the transitional period is the main reason of increasing the tension in the street.”

In this briefing produced for UCU Congress, Middle East Solidarity looks at the interlocking military and militia forces which threaten Sudan’s revolution, and the role of EU and UK governments in supporting them.

Download a printable version of this briefing here Sudan_military_militias_2019_briefing

Since December 2018, a mass mobilisation by millions of ordinary people demanding peaceful, democratic change has rocked Sudan. Dictator Omar el-Bashir, who had ruled Sudan for 30 years, was overthrown by his own generals, who then tried to take power for themselves through the Transitional Military Council. El Bashir’s regime is notorious for the large number of military and security agencies which the dictator relied on to repress opponents and fight his racist wars against people in Darfur and the Nubian mountains. Yet funding and technical support from the UK and EU government continues to empower military and security bodies in Sudan which are responsible for human rights abuses on a massive scale. The Khartoum Process, also known as the Horn of Africa Migration Route Initiative, involves parcelling out funding to the security forces and border agencies in the region, with Sudan receiving some €215 Million in 2017 alone.

Commanded by General Mohamed Dagalo, known as Hemedti, the RSF was formed out of the Janjaweed militias which carried out war crimes in Darfur, including mass killings of civilians and mass rapes. The RSF has also been fighting in Yemen under the Saudi-led coalition and is heavily involved in border policing. As part of the Khartoum Process, the European Union has established a Regional Operational Centre, or ROCK, which has the role of coordinating the activities of East Africa security forces, including those of the Sudanese regime, with European migration agencies. Run by British, French and Italian security personnel, the Centre is designed to support different national security forces in the region, including Sudan’s Rapid Support Forces (RSF). Researchers and human rights organisations have evidence that the RSF is involved both in people trafficking and in brutal raids against migrants attempting to leave Sudan. The RSF has repeatedly attacked the mass sit-ins organised by protesters in Khartoum and elsewhere in Sudan.

The National Intelligence and Security Service (NISS), operates its own detention centres, where torture and other abuses are rife, according to human rights organisations and testimony by survivors. NISS forces have repeatedly attacked the sit-ins, using live ammunition and tear gas in assaults on demonstrators in the capital Khartoum, running down and killing a protester with a vehicle in El Obeid, and shooting dead a protester in Zailengi. The director of NISS, Salah Gosh, resigned shortly after Omar el Bashir’s removal from power. When prosecutors wanted to question him over a bank account containing £801m, Gosh’s guards blocked his arrest.

Leading figures in the armed forces seized power on 11 April from Omar el Bashir, establishing a Transitional Military Council. As mass protests have swelled, protesters have said that rank-and-file soldiers and junior officers have sometimes protected them from attacks by RSF and NISS forces. Army troops have also used force against protesters. A day after announcing agreement on key elements of a deal to hand power over to a civilian government led by the opposition Freedom and Change Forces, the TMC suspended negotiations and sent soldiers to clear barricades, using gunfire “extensively” on Wednesday 15 May according to Reuters.

Opposition groups report that shadowy militias linked to the ruling National Congress Party have also been involved in attacks on the sit-ins, including a major assault on the Khartoum sit-in on 13 May. According to information received by Middle East Solidarity from the Sudan Doctors’ Union, the attackers used live ammunition from guns, rifles and machine guns, tear gas and metal bars. At least 6 people were killed.

Survivor’s testimony: Dr Bushra Gamar was arrested by NISS in 2011 because of his work collecting information about the regime’s human rights abuses in Darfur.

Someone gave me a hard blow on the bottom of my back … The pain was beyond description, I felt dizzy and sick. I heard a voice ordering me to stand up on my feet. They shackled my hands and ordered me to stand on the tip of my toes facing the wall. It was excruciatingly painful so I stood on the soles of my feet to get a little bit of relief.”

3 thoughts on “Briefing: Who are the armed men who threaten Sudan’s peaceful revolution?”