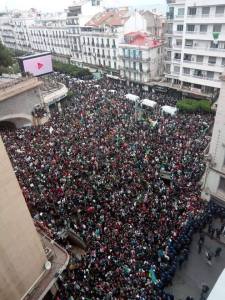 In issue 7 of Middle East Solidarity, Gianni Del Panta wrote a prescient analysis of the rising tide of strikes and demonstrations in Algeria. As a storm of protest now threatens to engulf Bouteflika’s regime, he explores the main currents in the new movement.

Over the last two weeks, Algeria has been rocked by a powerful wave of marches and demonstrations. Since February 22, the country has witnessed daily protests against president Abdelaziz Bouteflika’s bid for a fifth term in a row. Without doubt, the current turmoil represents the most powerful mass-based protest movement Algeria has seen since the 1988 popular uprising.

Since the end of the cruel and long-lasting civil war fought by the military against Islamist groups in the 1990s, Western commentators and liberal pundits have presented an image of Algeria as a stable state, committed to eradicating terrorism. Such an interpretation was strengthened by the ability of the Algerian autocracy, in contrast to what happened to other North African regimes, to weather the 2010-11 storm. For many, the combination of the legacy of the atrocities of the civil war and extensive social spending made feasible by hydrocarbon resources was enough to immunize Algeria from the spirit of the Arab uprisings.

Unsurprisingly, the outbreak of protests has stunned journalists and scholars. In their frenzy to find palatable explanations for something that they had never expected to witness, the framework used by commentators has been drawn from pro-market and liberal interpretation of the 2010-11 Arab uprisings. According to this perspective, what is happening today is an example of a clash between the people – represented as an unique and organic body – and a corrupted, mafia-style, and patronage-based regime. Exactly because the latter is represented as authoritarian, prevalently in favour of a state-led economy in which only crony and well-connected capitalists can gain access to the spoil of the system, protests have to be pro-democratic, in the liberal meaning of the term, and supportive of the free market. The quintessential element of such a picture is president Bouteflika. In a country in which almost 70 percent of the population is aged below 30, an ageing and ill man, forced to use a wheelchair after a stroke in 2013 and almost completely invisible to the public for the last 6 years, is now requesting a new mandate in elections that will be certainly neither free nor fair.

Yet, although Bouteflika’s decision to run for a fifth term in the coming April elections represents the triggering mechanism, the storm that is hitting Algeria now has been long in the making. As we have already tried to analyse in Middle East Solidarity, a cycle of protests has speeded up markedly since 2013. This has mainly been the outcome of action by three main groups. Firstly, public sector workers employed in the education and health sectors, organised through independent trade unions. Secondly, the lower classes of the south of the country, the area in which gas and oil resources are most concentrated, but constantly marginalised in economic, social and political terms by the elites of the coast. Thirdly and finally, blue-collar workers in the heavy industrialized area of Rouïba, not far away from the capital Algiers. Mobilisations by these groups have created a culture of protest, producing several important breaks in the regime’s authoritarian domination. This, in turn, opened up space for today’s protest movement, as the political opposition has capitalised on the momentum created by social protests.

On Friday 8 March, which coincided with International Women’s Day, Algeria witnessed the largest and most radical protests since the start of movement. Massive marches, chanting against the regime, were not only recorded in Algiers, but also in Tizi Ouzou, Oran, Constantine, as well as in many other cities across the country. What is even more important, however, it is the fact that several crucial social actors have expressed their solidarity to the protest movement – from the workers of the industrial area of Rouïba to the independent trade unions of the educational sector. Up to now, however, the ‘political’ wing and the ‘economic’ protests have not fused yet into a single moment of general insurrection, what Rosa Luxemburg termed the mass strike. In order to move a step forward, workers as a collective actor have to join actively the movement through protests on the workplace, strikes and other forms of agitation. That happens, the regime will be in serious trouble.

What will happen next remains difficult to predict. In contrast to the 2010-11 revolutionary uprisings, when the anger of the masses – at least, initially – was largely directed against the presidential family and some specific state apparatuses, in general the Ministry of the Interior, Bouteflika’s extremely precarious health condition makes clear that the president is more hostage of the current situation than a powerful player. In such a regard, the masses have immediately turned their frustration against the system as a whole. This seems to suggest a relatively more advanced starting point in the development of the movement. On the other hand, however, the military remains the real backbone of the regime, which is largely in its hands. As General Ahmed Gaïd Salah, chief of the army and the strong man of the regime, menacingly reminded Algerians recently, the armed forces will not tolerate unrest and disruption. Any would-be revolutionary movement which develops in Algeria will therefore have to challenge the plans of the military.