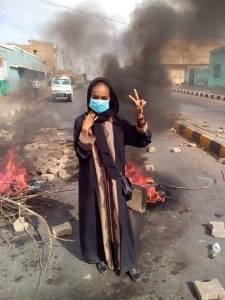 Women activists are playing key roles in the popular uprising which has been shaking Sudan since December 2018. Sudanese activist Fatima Joda writes on her experience of seeing protests brutally repressed by the El Bashir regime’s security forces for Middle East Solidarity magazine. Read more on the background here. Find ideas for actions you can take in solidarity with the Sudanese uprising at the end of this article.

On 17 January I was in the crowd, out on the streets of Burri, one of the most politically active neighborhoods of Khartoum. As we were moving peacefully along, women and children from the area joined the protest and started chanting with us. Security Forces started breaking up the crowd by throwing teargas at us. Everyone began running and hiding inside the houses, which the neighborhood families opened up in order to hide the protesters. After a couple of minutes we began to gather again as security forces and police drove to a near street to separate other protesters.

The crowd was bigger the second time, but this time the force used was more brutal. The security forces used live bullets, and detained everyone they captured. They were terrible, beating, torturing and mocking those who got caught. One of the boys who got captured was getting beaten by five men and we started to see blood coming out his body. One of the girls couldn’t handle seeing that, and she went out screaming and tried to stop them, but she ended up getting beaten and detained with him. While this was happening, another protester was trying to escape, but they shot him with a live bullet and in seconds the guy was down. Until now, we don’t who he was or where they took him. The teargas they use makes your body and eyes burn, your vision becomes blurred and sometimes you completely lose your sight for minutes. You have a hard time breathing; I have witnessed many people fainting and having a complete blackout during other protests.

Many protesters have lost parts of their bodies, like Samih and Amani who completely lost one of their eyes. The security forces are attacking injured people inside hospitals, breaking into activists houses and detaining them, threatening journalists with execution, banning newspapers, detaining and torturing kids who are less than 15 years old.
A teacher who was arrested from his home was tortured to death inside the detention cell. Mahgoub Al-Taj Mahjoub, a second year medical student from Al Razi College was beaten to death in front of his university for defending his female colleagues from police men. Despite the repression, we feel the revolution is different this time. Unlike previous movements like the one in 2013 where many protesters were also killed. more people are involved. We are fed up. People are starving, they are being oppressed in every aspect of their lives. They know how corrupt the government is and the extent of human rights violations since Omar El Bashir’s regime came to power in 1989.

We are no longer scared of death, and you can tell this from the increasing numbers of people joining the protests every day. Everyone is out on the streets now. It’s not easy to overthrow a dictatorship that has been in power for 30 years. It will take months and maybe years till we get our freedom. The only thing I am sure about now is that we are not going to be silent anymore.