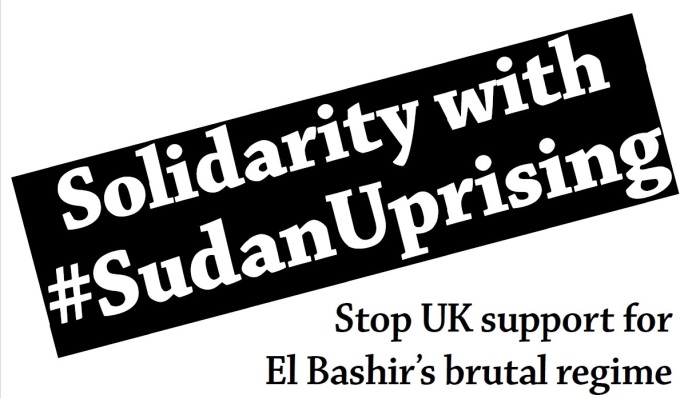 Read more on the background here

“We stand in solidarity with the demands of protesters in Sudan who are calling for democratic change and the end of Omar El Bashir’s repressive regime. The movement began in response to the government’s attacks on living standards through austerity measures which led to workers not being paid and the cost of bread and fuel spiralling out of control. Now doctors, teachers, lawyers, journalists, academics and workers across the public sector have supported the movement and the call for democratic elections after a four year transition period. We call on the British government to condemn the use of lethal force and violence against demonstrators, to break diplomatic links with the regime and stop training Sudan’s police, military and security forces. We demand the immediate release of all political prisoners and detainees, and an end to torture and violence against Sudanese citizens exercising their rights to protest and express their demands for democracy and social justice.”

Names will be published online and sent to the Sudanese Embassy in the UK. If you leave your details we will contact you with updates about this campaign and other similiar campaigns organised by MENA Solidarity.

Add your name to this letter

Please note names will not appear automatically. The above is a subset of signatures that have already been collected.