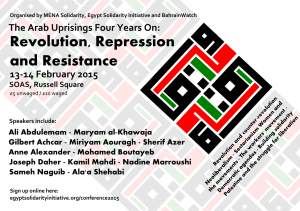 Moroccan civil servant and trade unionist Mohammed Boutayeb is a former leading student activist and political prisoner, and a member of the revolutionary socialist group, Al-Mounadil-a. He was jailed by the Moroccan authorities between 2004 and 2007 for his activism on campus. He lives in Rabat, and is an official representative of the Democratic Current and a member of the main union council of the Union Marocain du Travail (UMT). The UMT is one of three trade union federations in Morocco and has a membership of around 300,000.

Mohammed will be speaking at our conference on 13-14 February, The Arab Uprisings Four Years On – Revolution, Resistance and Repression. Join us there to hear more about the battle for trade union freedoms and political rights from Morocco to Bahrain. Book online here.

We interviewed Mohammed about his role in the UMT and recent struggles by Moroccan workers against austerity and repression:

The democratic current of which I am a member plays an active role in Moroccan labour movement organisations, whether in the public sector (civil servants in the government ministries, education workers and local council workers). We also play a key role in organising agricultural workers, and we are considered to be the trade union organisation with the best representation in the agricultural sector.

However, our trade union organisations are under constant siege from the Moroccan authorities which refuses to give legal recognition to trade union activism. Over recent years we have organised two general strikes in the public sector in February 2013 and October 2014, and we have participated in and supported all the workers’ struggles which militant trade union organisations have called for. We played an important role in the success of the most recent general strike which shook Morocco on 29 October 2014.

It is worth mentioning that our formation as a trade union current within the UMT (which was itself founded in March 1955) goes back to our rejection of the official policies of the leadership of the federation. These policies are characterised by co-operation with the bosses and their state, as well attacks on the principles of democratic organisation within the union and involvement with well-known cases of corruption and manipulation of union finances.”