Egyptian Doctors voted for a national strike at a packed meeting of their union’s general assembly on 21 September. On 1 October, doctors across the country will close outpatient and non-emergency services to demand a rise in health spending to 15% of the state budget, better security for hospital staff and patients, and a minimum wage for medical practitioners of 3000 Egyptian pounds per month (£300). Current rates of pay for doctors in public hospitals can be as little as 10 per cent of this figure.

Here doctors who will be involved in the strike explain why they are taking action and ask patients to support them. Pictures and report via Mosireen video collective.

“This is the human dignity we have been looking for”

“On the day of the strike, patients will still be able to come to the hospital as normal. They will find the outpatient clinics are closed, but they will be able to get everything they need for free. Women will not have to pay any fees during childbirth. That is actually what the law says should happen. What normally happens is that patients in the government hospitals have to pay between 50 and 150 Egyptian pounds (£5 – £15), or in the case of a Caesarian between 500 and 1000 Egyptian pounds (£50 – £100), depending on the hospital. This is completely illegal. And the government is doing it because they are not spending money on health care. We are going to make the health care system work.

Of course doctors aren’t angels. We’re not only organising the strike on behalf of the patients. We are doing it in the interests of the doctors and the patients. We want doctors to be able to take home pay which will be enough so that they do not go and work in private practice. So they don’t have to run around between 3 or 4 workplaces and are exhausted and can’t even talk to the patients when they come to the government hospitals. 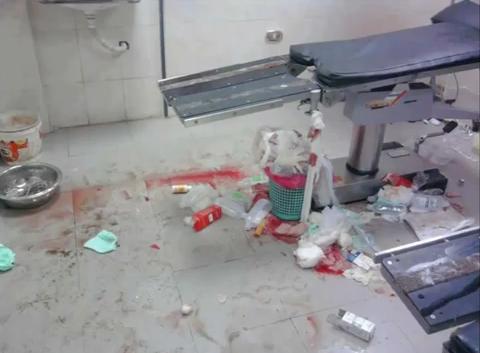 We want the patient to find a clean hospital, just as we want to work in clean environment. We don’t want to work where everything is devastated. We want to work were there is respect, so that we can treat patients with respect. We want to take a decent wage, so that we can offer a decent service. This is what social justice is. This is the social justice that our children died for in the revolution. This is the human dignity we have been looking for. For us, and for you.”
Dr Mona Mina, member of Doctors Without Rights and the Doctors’ Union General Council 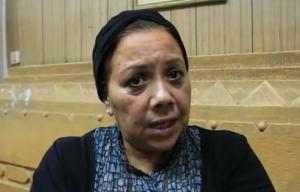 “A long time ago we had a campaign where we went out to ask people whether they liked the treatment and the service they received in the government hospitals. The first thing we heard from them was “of course not”. We heard “the doctors are criminals and so are the nurses.”

We know that there is a lot of unfairness in the health service, because the amount of state spending on health in Egypt is something to be ashamed of. We signed an agreement in 2002 to raise spending on health to 15% [of the state budget] and now we’re in 2012, and we spend no more than 4.5%, 28 billion pounds, of the state budget on health, and 8 billion of that the Ministry of Health can’t even account for, then we can’t do anything for Egyptian citizens. We can only say “if you’re poor, you’ll die, you won’t find treatment.” So our first demand is to raise the state budget for health. Raising the state budget for health is what will guarantee a good service and will prevent attacks on hospital staff.”
Dr Imtiaz Hassouna, Member of the General Council of the Doctors’ Union, representing the West Delta region

“Some of us have families, and doctors’ salaries are enough to support a family. They don’t allow us to have a dignified life.”
Dr Riham Akram Ramz, Munira General Hospital

“We’re telling the patients that they are our families – our parents, brothers and sisters. We’re not doing this against the patients at all. We are demanding their rights and we ask them to stand with us.”
Dr Ahmed Fathy, Secretary of the Doctors’ Union welfare fund in Cairo. 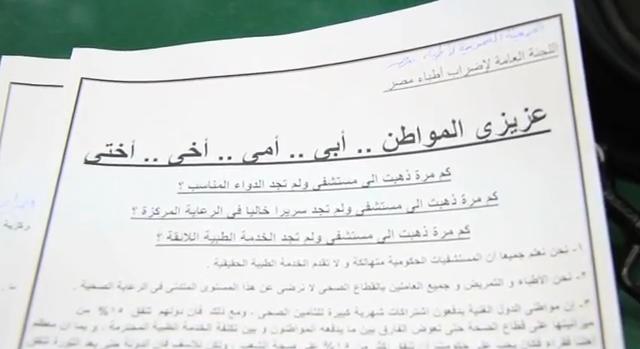 Doctors’ leaflet to patients explaining the reasons for the strike

7 thoughts on “Egypt: Doctors prepare to strike “for social justice””