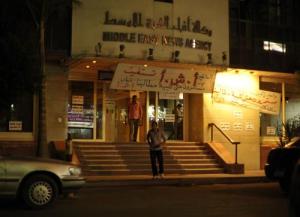 Thursday night: Visited the Middle East News Agency again tonight, to see how their strike was getting on, and spent the evening with journalists Sherif and then with Walid.

First Sherif would like to say how thankful they are for the messages of solidarity from British journalists’ unions. At the same time he pointed out a mistake in my first blog: monthly salaries at MENA, even after 10 years work, lie at 550 Egyptian Pounds (55 Pounds Sterling), and not at 3000.

They are demanding and indeed have been officially granted an immediate increase of 15 percent as from July. But this is already the third month the increase hasn’t actually materialized.

But instead of continuing their minority strike of 50 members out of 500, the activists decided it’s better to first win the argument with the other colleagues and get them envolved in lower key activities. So yesterday afternoon they gathered 150 staff during working hours to demonstrate in front of the government buildings. They made it to
front page news in all the important newspapers and on many tv channels. The second photograph shows a typical newspaper article on one of the many strikes taking place around the country which also mentions their strike.

Tomorrow, Friday, there will be a meeting between their director and a government minister. The director is hoping to win the argument by pointing out that MENA, as a government news agency with representative offices in 30 countries, is of vital importance to the country and needs more government funds. 80 percent of all Egyptian newspapers and other media are already affiliated to MENA for news and photos, so that it can’t simply expand its activities in the private sector in order to generate more income. Whenever their website goes down even for only a couple of minutes, they immediately start getting frantic calls from dozens of media asking them when they will be up again.

Walid also mentioned the teachers’ strike. Their demand for 3000 Egyptian Pounds is flanked by another completely different demand: that private teaching on the side should be completely forbidden. This is more important than it sounds. Because possibly a quarter of teachers put more energy into these than into the classroom and earn all teachers a bad reputation. But Walid said the government simply can’t afford the 3000. It seems, when government spokespersons point to empty coffers, the workers’ side finds it difficult to develop counter arguments where to get the money from.

Going back to the 18 days of Mubarak’s fall, he said the system will never revert to being so oppressive as it was. People have learnt too much. Just in front of the MENA building a couple of army officers who had decided they had had enough of killing people in the name of order were being chased by a special security section. One got hit by a bullet and died, one ran into the underground garage, and the workers switched off all the lights so he might better hide himself. Officers were running into mosques and tearing off their uniforms, they were so frightened of being attacked by demonstrators. The system of repression still hasn’t recovered.

As we walked by one of the street cafes near Tahrir Square he pointed out all the young people sitting around. Most had lost a friend or knew someone who had been seriously wounded. They were continuing their discussions about the way forward and how to organize. It will never be the same.