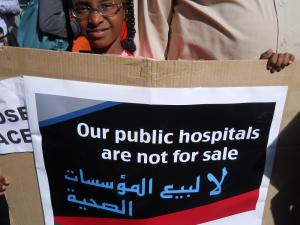 Activists involved in organising the recent wave of protests which have spread across Sudan since mid-June have been arrested and tortured by the regime, sources in the Sudanese opposition told MENA Solidarity Network this week.

Demonstrations by students on 16 June against austerity measures have sparked a wider protest movement which has begun to raise slogans echoing those of the revolutions in the Arab world: “Revolution is the choice of the pepole” and “the people want the downfall of the regime.”

The regime of Omar al-Bashir has imposed sweeping cuts and privatisation schemes in a desperate attempt to deal with the financial crisis triggered by the separation of South Sudan last year and the loss of most of the Khartoum government’s oil revenues. Meanwhile up to a million refugees are trapped in the Nuba mountains and facing devastating shortages of food and medicine.

The wave of protests across Sudan in recent weeks has sparked a brutal response from the authorities. Sudanese opposition activists told MENA Solidarity Network that up to 2,000 have been arrested and many tortured in detention. Among those detained and tortured include three members of the Sudanese Communist Party: Salah Samaret, a SCP party worker, Mohieldin Aljald, an engineer, and computer programmer Amira Osman. There is also rising concern over the fate of NGO activist Nahid Jabralla, who heads the women and children’s rights group SEEMA and was arrested on 3 July. Nahid suffers from a serious health condition and cannot walk unaided.

In a statement issued on 11 July Human Rights Watch and Amnesty International condemned the Sudanese government’s clampdown, and called for the immediate release of all those arrested. A student who was injured with rubber bullets when the security forces stormed a mosque in Omdurman told Amnesty:

“When we got out, we saw the police outside the mosque. So we started chanting ‘Peaceful! Peaceful’ and sat on the ground to show them we didn’t want confrontation, but they walked toward us and fired rubber bullets and tear gas at us, and chased us inside the mosque.”

4 thoughts on “Sudan: Activists arrested and tortured in clampdown on protests”