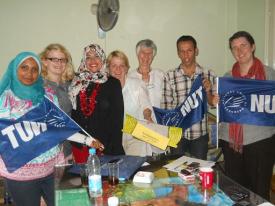 Activists from MENA Solidarity Network visited Cairo and Alexandria 3-8 June to meet activists from the independent unions and hear about the latest developments in the revolution.

The visit coincided with the sudden revival of massive protests, as hundreds of thousands came out into the streets in protest at the verdicts in the trials of Mubarak and his aides, which many revolutionaries fear will be overturned on appeal. The demonstrations were fuelled by anger at the entry of Mubarak’s last Prime Minister, Ahmed Shafiq into the second round of the presidential elections, raising the prospect of the old regime re-inventing itself at the ballot box.

If you would like to invite one of the delegation to speak at your union branch meeting please get in touch with us by email: menasolidarity@gmail.com