Ibtisam began by telling me that there were two reported cases of Coronavirus in Gaza. Because of the blockade since 2006 the health system is extremely weak.  There are only sixty ventilators at the moment in Gaza, with a population of two million people in an area 24km x 10km.

Ibtisam is terrified of the consequences of a Covid-19 outbreak. The impact of the Israeli occupation and the siege on the health system of Gaza has already been disastrous. Medical staff do not receive a full salary. She says that many experienced doctors and surgeons, for example, have left to find work elsewhere, leaving inexperienced staff to deal with the daily medical crisis. This is before the onset of coronavirus.

Qatar is reported to have donated $15 million towards medicines and other essential requirements.

“I’m scared because the poverty rates are very high”, said Ibtisam. “People are posting on social media that they have no money to buy food. Where there has been casual employment, workers now have to stay at home because places of work have been ordered to close during the coronavirus crisis. Now there is more hardship on top of the Israeli occupation.

“Another real problem is hundreds of most vulnerable poor families who are looked after through the distribution of food aid. Volunteers and relief workers are frightened about the coronavirus being transmitted. UNRWA (The UN Relief and Works Agency) has suspended the distribution process and this means more and more suffering and deprivation.”

Ibtisam said that food security is at a minimum in Gaza. Even though there are people with regular work they are on very low salaries and therefore are counted as poor. One example she gave was a person working in the Hamas administration on 1200 Israeli shekels a month (4.4IS to the pound). Many have large families.

There is also the problem of private businesses and market traders, for example, who cannot pay their bills and fall into bankruptcy. Gaza is in a state of economic collapse. Ibtisam also spoke about people being unable to afford to marry. Now there are many people well into their thirties who remain single.

It is clear that the individual toll on lives is incalculable from talking to Ibtisam. She said that the psychological effects of occupation and siege have caused a mental health crisis. The fear of coronavirus is already exacerbating this problem.

Divorce rates are now very high because of economic pressure on married couples. Her word was ‘scary’ because of the complications of looking after children. “It’s a complete breakdown”.

Ibtisam also spoke about the problem that customs within the Palestinian culture now present, such as sociablity, touching and embracing. “There are those who are being careless who are not abiding by the warnings about coronavirus. Children are still playing together for example. Even highly educated people I know have dismissed the fears.”

She said the younger generation is very careless and are underestimating the warnings from the World Health Organisation. “I think that this is because they have been through so much under the thirteen year blockade and occupation and they are being complacent. There have been three major Israeli military attacks since the New Year of 2008/09. There is also the problem of water and other services such as electricity which the Israelis have cut. For two million people every day is about surviving. For some it is seen as just another problem to deal with. Society here is in breakdown.”

“We’re missing the collective as we are being forced into isolation. So many here are suffering who have lost people in their families. Palestinian social structures are traditionally so cohesive. The loss of collectiveness is a great sadness.

“It’s extreme here. I’m trying to keep control of my own life. People are more important than the land. Care is fundamental to our heritage. The media shows little or nothing of the despair of people here in Gaza, the poverty, unemployment, psychological and social collapse.”

“We are in solidarity with Italy. There is such a strong link. We are very sympathetic and sad about the coronavirus crisis there. We have strong links of friendship with Italy. Our prayers are with them” 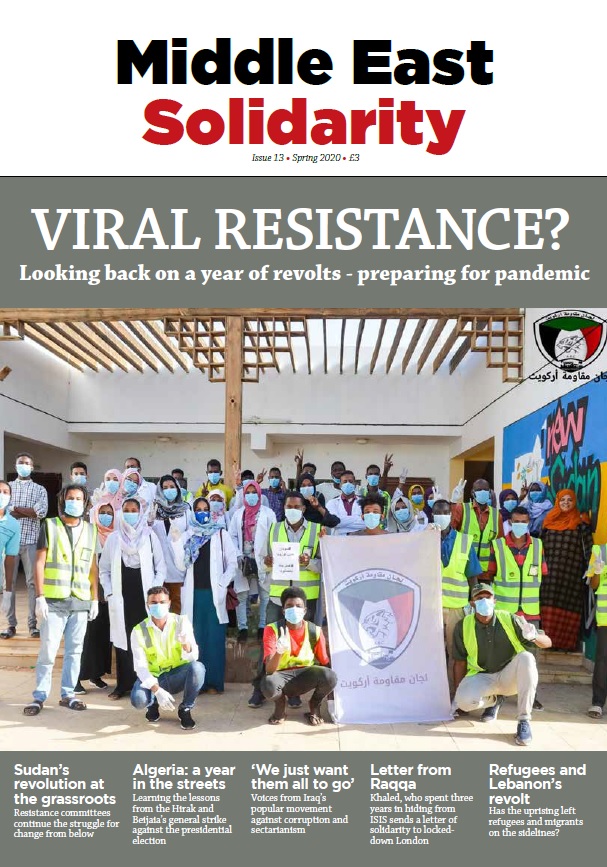 Donate £2 for a digital copy of our magazine

This article is from the current issue of Middle East Solidarity magazine - you can download for free menasolidaritynetwork.com/magazine/ but you can also help us continue our work by donating towards your digital copy here.

One thought on “Gaza resident: ‘For two million people every day is about survival’”