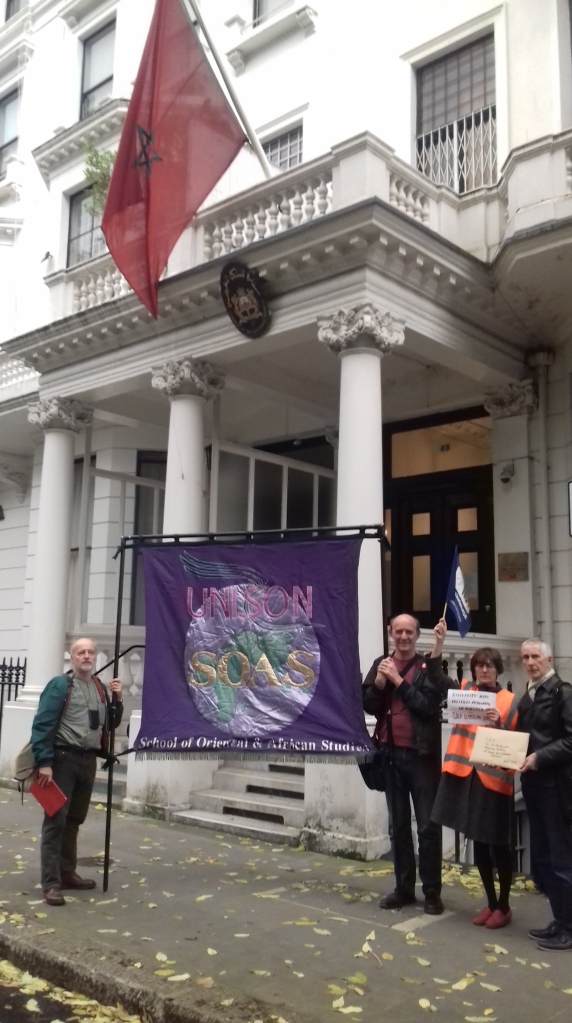 Representatives of four British trade unions visited the Moroccan embassy in London on 16 October to hand in a petition with over 500 signatures from trade unionists and activists calling for the release of political prisoners detained during the crackdown on the Hirak popular movement in the Rif region. The delegation was timed to highlight the upcoming trial of Hamid el Mahdaoui, editor of the news website http://www.badil.info which was set to begin on 17 October.

Alan Gibson, a member of the National Union of Journalists’ National Executive Committee, took part in the delegation to the embassy.

The jailing of Hamid el Mahdaoui is an outrageous attack on freedom of speech, and his upcoming trial is a travesty of justice,” he said. “There should be an international campaign to bring about his release as quickly as possible.”

El Mahdaoui is already serving a one year sentence and has been detained in prolonged solitary confinement, conditions which Amnesty International has condemned as “amounting to torture”. Nasser Zefzafi, a leading figure from the Hirak movement has also been kept in solitary confinement over a period of several months. Meanwhile at least 35 detainees were reported to be on hunger strike by the beginning of October.

I am here to show solidarity with political prisoners and journalists in Morocco, and to show continuing support for trade union rights and human rights. We are very concerned to hear about the treatment of journalists who have simply reported the facts and then been accused of sedition.”

Sandy Nicoll, Branch secretary of the Unison trade union branch at the School of Oriental and African Studies (SOAS) and member of the Unison National Executive Committee for the Higher Education sector (personal capacity), said:

I think it is truly appalling that activists are facing lengthy prison sentences and have been arrested for what is basically standing up for human rights. The fact that there are trade unionists and journalists among those arrested makes it even worse, because standing up for the rights of ordinary people is exactly the role that trade unionists ought to be playing. I’m here to show my solidarity for people who are resisting what is showing itself to be a draconian regime.”

I was shocked to hear that a movement demanding investment in public services and jobs for the unemployed has been repressed so brutally. As a trade unionist who is heavily involved in fighting for these things in Britain, I want to send my solidarity to my brothers and sisters in the Rif and other parts of Morocco who have been detained simply for demanding their rights. I also have a clear message for the Moroccan government: you can’t lock up the struggle for justice – it is much bigger than any of your prisons.”

In July, at the time we launched this petition, my union raised concerns about the arrests and repression of the Hirak movement. Our general secretary wrote to the Moroccan trade union federation UMT to express solidarity with fellow trade unionists arrested in the crackdown. Although we welcome the news that a small number of prisoners have been released, overall, the situation is getting worse, not better, and we are now hearing that there are over 400 detainees. After today, we will be contacting our trade union colleagues in the UK and around the world and urging them to support the campaign for the release of the Hirak prisoners.” 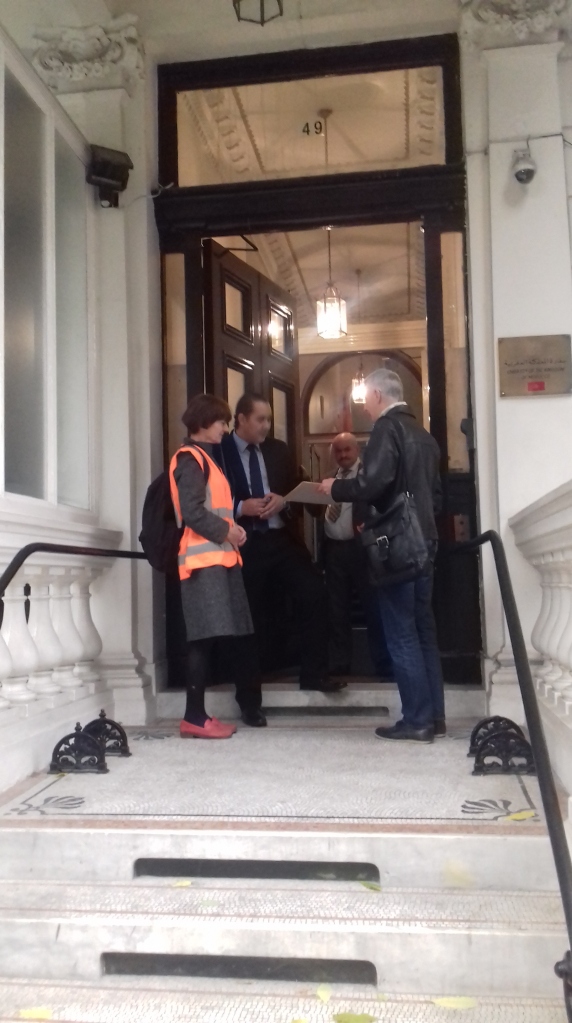 Read the text of the petition below:

We condemn the arrest and detention of over 200 activists from the Rif region in the far north of Morocco since the end of May 2017. The Moroccan authorities are attempting to crush the mass protest movement which erupted in the city of Al Hoceima in October 2016 following the killing of Mohsin Fikri, a young unemployed man who made a living selling fish, by municipal officials who were attempting to confiscate his wares. Mohsin was crushed to death in the back of a rubbish truck, sparking demonstrations in 50 cities across Morocco.

Since October 2016, the movement’s demands have widened to include calls for investment in education, health and job creation in the Rif region, as well as ending repression by the Moroccan army and security forces.

The detainees include Naser Zefzafi, an unemployed activist who has played a key role in leading the protest movement, Mohamed Jalloul, a left-wing activist and former political prisoner and Salima Ziani, a student activist and musician who is known as “Silya”. Four leading activists from the Al Hoceima branch of Morocco’s largest union federation, the Union Marocaine du Travail (UMT) were also arrested in the crackdown.

We call on the Moroccan authorities to immediately release political prisoners from the Rif region, to end the repression of this peaceful protest movement and instead meet its demands for social and political reforms.