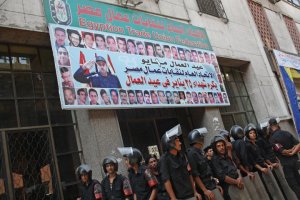 Riot police stood guard outside the ETUF headquarters in Cairo on 7 August and its former officials – staunch supporters of the old regime – were unceremoniously barred from entering the building by the temporary executive committee.

This committee was appointed by the Minister of Labour on 4 August to oversee the affairs of the federation and the process of dissolving the executives of its constituent unions, until new elections can be held under judicial supervision. Committee members include both members of the ETUF and a number of leading independent trade unionists, including Ahmed al-Sayyid, president of the Health Technicians Union and Wael Habib, a leading trade union activist from Misr Spinning in Mahalla.