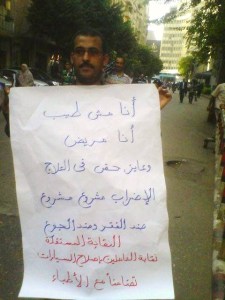 Egypt’s doctors have been on strike since 1 October. They are fighting for a raise in state spending on health, improvements in their pay and conditions and action by the government to end violent attacks on healthworkers in the workplace.

Despite a massive smear campaign by the media and constant attacks by the Muslim Brotherhood government, the doctors have been winning solidarity for their battle from other healthworkers and trade unionists, a delegation of activists from MENA Solidarity Network found out on a visit to Cairo at the beginning of November.

At Muneera Hospital in central Cairo we met Dr Ahmed Shawqi, from the hospital’s strike committee and some of his colleagues. “We have been on strike for a month now, but the government has no answer to our demands”, explained Dr Ahmed. “The doctors voted unanimously for this strike so officially it is a doctors’ strike. The leadership of the nurses’ union is corrupt – they are against the strike – they are part of the old regime but the nurses are with us. This applies to all the health personnel – the physiotherapists, the dentists, the pharmacists – they are also striking.”

“We want to make it clear that the strike is not harming patients – unlike the media campaign which is accusing us of harming patients”, added one of his colleagues. Doctors have continued to provide emergency cover throughout the strike, but they have refused to collect fees from patients and are providing treatment for free.

Doctors played a key role in the revolution, Dr Ahmed told us. “We were the only emergency service – even the police were not functioning. Activist doctors worked in the field hospitals in the square. This hospital was very close to the action – the injured people were brought here – we were on the front line.” 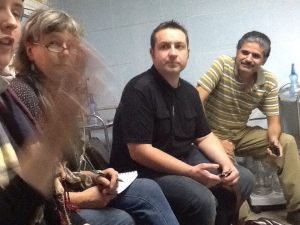 Nurses told us that they were standing with the doctors in support of the strike, despite the opposition of their own union leaders. “We are joining the doctors’ strike but our leaders oppose it. They are from the old ruling party. We want to change our union. It’s our union and we want it to stand up for us. The old leadership has been in charge for 20 years.”

Like most Egyptian health workers, the nurses at Muneera Hospital are paid a pittance. “Our salaries are really low. We don’t have any money for a decent retirement,” one nurse told us. “I take 400 Egyptian pounds a month after 30 years of work. We want our kids to have a chance to go to university and we can’t afford it. Food prices are really high.”

Beyond the hospital, the doctors’ strike is winning support from activists in the independent unions and political parties. Hundreds of doctors and their supporters took part in a human chain which stretched for a kilometre between the Doctors’ Union headquarters and the Ministry of Health on 1 November.

Dozens of leading activists from independent unions affiliated to the Egyptian Federation of Independent Trade Unions brought banners and small delegations to the protest. Nabil al-Sayyad president of the Union of Car Maintenance Workers took part in the march. “I am here in solidarity with the doctors because their strike is legitimate”, he said. “They are fighting for every Egyptian citizen’s right to health care. It isn’t the doctors’ fault that the health system isn’t working – it’s the fault of the government. Health and education are the two most important things in any society. That’s why the independent unions are in solidarity with the doctors’ strike.”

One thought on “Egypt: Striking doctors win solidarity in battle for health”