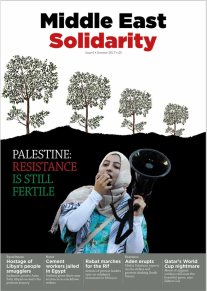 Print copies £3 each or £20 for 10 (plus postage). Order direct from Bookmarks Bookshop

Following a mass campaign of solidarity with hunger strikes by Palestinian prisoners, Abdulwahhab Sabbah finds a mood of defiance on the West Bank

‘Speak out for Mohamed Ramadan’

Abuse of migrant workers remains at the heart of the 2022 World Cup project, despite promises of reform, reports Fabien Goa