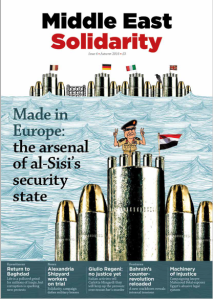 Made in Europe: the arsenal of al-Sisi’s security state

In figures, the arms and security deals which equip Egypt’s security forces and military.

A new phase in Bahrain’s counter-revolution

Luke G. G. Bhatia argues that the jailing of moderate opposition leaders and increased repression of human rights activists marks a change of strategy for the Bahraini regime

Iraq: the legacy of occupation

One day in Greece