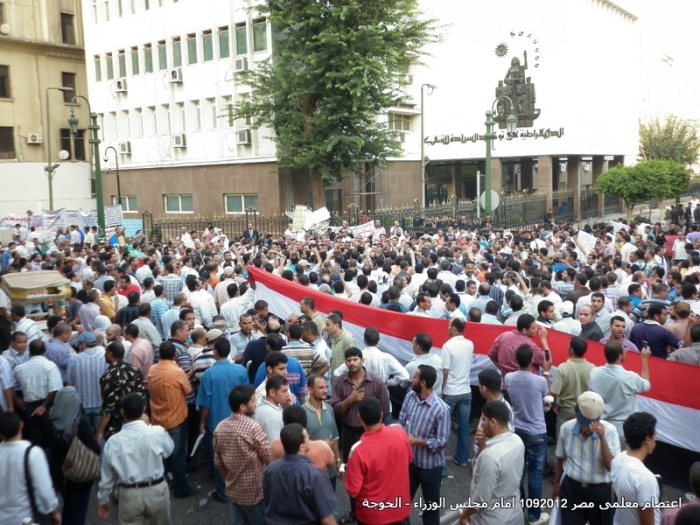 Leaders of the independent teachers’ unions called on their colleagues across Egypt to strike on the first day of the new school year, 15 September as teachers’ protests escalated over the past week.

For the past week teachers have been encamped outside the Cabinet Offices in central Cairo, demanding an end to the ’empty promises’ of the past year. Ayman al-Bialy, one of the leading activists in the Independent Teachers’ Syndicate, one of two main independent unions founded in the past two years, said on 13 September

“I’m calling on all Egyptian teachers to join the strike. We need to take real strike action, not just make phone calls. I’m calling on teachers to come to school, but not to work. Don’t stay at home. We want to make a peaceful protest through our strike, not close the doors of the schools or throw the pupils out. To the parents, I’m saying ‘we’re parents too’. And we’re not just striking about money, but about reforming the curriculum so that your children will benefit from education. It is your national duty to show solidarity with us. We’re the real teachers of your children, not those who push private lessons. We’re calling on the government to criminalise private lessons. But the Egyptian government is refusing to do this. It is the government that encourages private lessons, by refusing to pay teachers a proper wage.”

The protests this week have been called by the independent unions, but have gained support from teachers who are still members of the Teaching Professions Syndicate, the Mubarak-era union which is now dominated by the Muslim Brotherhood. The TPS leaders are not backing the strike calls and demonstrations, however.

One thought on “Egypt: Teachers plan strike on the first day of school”