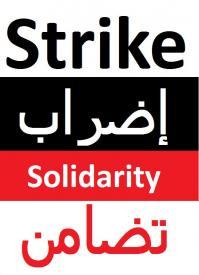 Textile workers in Mahalla al-Kubra, Egypt, are on strike. Read more here on their demands and why solidarity matters.

“We send our solidarity greetings to colleagues in Misr Spinning in Mahalla and congratulate them for their strike which began on 15 July for improved bonuses and to root out corruption from the company.  We congratulate them also for their role in leading the fight for the minimum wage on behalf of all Egyptian workers. In Britain, many of us in the trade union movement have been inspired by the courage of the Mahalla workers in our own struggles for social justice.

We are all fighting the same enemy: an economic system which benefits a tiny minority at the expense of the 99%.”

To the mahalla textile workers. Solidarity from the UK. I write from the Avon fire fighters in. Bristol UK to say your fight inspires us every day, you have been the beating heart of the revolution and long may you continue until you win all demands.
Jaz Thomas Avon fire and rescue.
Dear comrades
Solidarity greetings from council workers in York to the striking textile workers of the Misr Spinning Factory in Mahalla al-Kubra.  The courage and resistance of the Egyptian workers has been an inspiration around the world.  Your cause is just and your fight is our fight.
In solidarity
Ben Drake, Branch Chair, York City UNISON
Dear Brothers and Sisters,

The struggle for democracy in Egypt over the past year and a half has been a great inspiration to millions in the UK.Our own country, although enjouying democratically elected government, is run by the rich for the benefit of the rich. We are currently facing massive attacks on our public services, job security, pensions, pay and legal rights. The overthrow of the old regime in Egypt gives us courage to fight our own government.

I am writing to thank you for this and to let you know that many here are aware of your continuing struggle in the streets and in the workplaces. The determination and strength of the textile workers is particularly inspiring. I send you my best wishes for your current strikes, you have the power to win and to change the face of both Egypt and the world for ever.

Rob Murthwaite, Senior Lecturer in Law, London Metropolitan University University and Colleges Union Branch Officer.
Manchester and Salford Branch of the National Union of Journalists sends greetings to the Mahalla strikers. We hope that your courageous industrial action is successful.
In solidarity,
Kath Grant
Secretary,
NUJ Manchester and Salford Branch
Bravo strikers! I love indefinite strikes! It’s the only way to show the lousy bosses you are serious – and you are doing it! Keep up the fight – workers of the world unite! Solidarity – fight to victory. Vive la revolucion Greetings from Hastings in S.E. England. Sam Turner

On behalf of UNISON members in the London Fire and Emergency Planning Authority I congratulate you on your strike against oppression and exploitation.

The fight for democracy and workers’ rights in Egypt and across the Middle East is an inspiration to trade unionists in Britain. Although we have had better living standards and are not facing a brutal military junta, the bankers and their political puppets in the UK government are looking to take away everything we have fought for over many decades. Like you our living standards are under attack as the employers try to protect their profits at our expense.

Your heroic struggle to get rid of corrupt bosses and for more pay is a wonderful example of how to resist the austerity measures that capitalists east and west are trying to impose on the workers of the world. I wish you every success in your struggle.

Congratulations on your magnificent stand. Your fight is our fight. Solidarity forever.
Phil Turner, vice-chair, on behalf of South Yorkshire National Union of Journalists.

Pakistan Labour Federation (PLF) fully support the Strike of  20,000 workers at the Misr Spinning plant in Mahalla and demands to: increase the bonuses.

On behalf of the Executive Board of Pakistan Labour Federation (PLF) we are demanding the Newly elected President of Egypt to accept the demands of the Woman worker: who are sweating blood. To the Spinning Plant and also demands to increase their wages with out any further delay.

We also demanded to dismissed Mr  Fouad Abd-al-Alim new head of the public sector Holding Company for Textiles and Garment Production because he was the most corrupt one here. and destroyed the factory in Mahalla and is destroying the rest of the public textile factories. The workers here are making the revolution again from the start. The coming revolution will be a workers’ revolution. and their problems should be solved on priority’

Panos Garantziotis: Victory to the strike of Mahalla textile workers! The greek worker’s movement is with you!

SOLIDARITY from the German Vereinigung Selbstorganisierter ArbeiterInnen (Union of self organized workers) “Solidarität”. Alone you will lose, together, you will win! Klaus Negro

South Gloucestershire Division of the National Union of Teachers (UK) wishes to express its support for the Mahalla strikers. Your fight is our fight.

I want to wish the striking workers success in their struggle / strike and offer solidarity greetings from Liverpool, UK. UNITY IS STRENGTH!
THE WORKERS UNITED WILL NEVER BE DEFEATED!
David Fagan, UCATT
“Victory to the strikers at Malhalla! Victory to those who fight for justice for the workers and peasants of Egypt! Yours is the true face of the Egyptian revolution. You fought Mubarak’s dictatorship when your bosses were still kissing his hand. You fight for a living wage and the dignity of working people. You fight for social justice. Teach your bosses again to be afraid of the collective power of the workers of Malhalla.
Your victory will inspire workers in Egypt and workers across the world. “Sasha Simic,
USDAW Shop Steward, C133 branch, Central Books, london, E9 5LN, UK

5 thoughts on “Egypt: International messages of solidarity with the Mahalla strike”