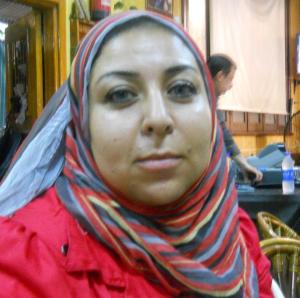 Dr Shima’a Mosallam is a founding member of the independent union at Abbassiya General Psychiatric Hospital, Cairo where she is a doctor. She was also member of the Higher Strike Committee of the Doctors’ Union which organised two nation-wide strikes by doctors in May 2011.

“The story of the independent union really begins before the revolution in November 2010. The Minister of Health at the time wanted to close down the hospital and transfer it outside Cairo in order to sell the land to property developers. So we got together as a group of activists in the hospital and started a petition campaign gathering signatures opposing the plans, and exposing how it would affect patients. We organised a really strong campaign and organised a protest in the hospital and thankfully we were successful and stopped the sale. This really got people interested and active so we put together a plan from each department about how things could improve.

We were just beginning to work on this plan when the revolution happened on 25 January 2011. After the uprising we got together, it was in March or thereabouts, and started to ask ourselves, ‘what’s the next step?’ The first thing we did was mount a successful campaign to get three of our colleagues reinstated who had been dismissed back in November. After that we began to talk about how to get properly organised, and not just among the doctors in the hospital. We heard about the independent union in Manshiyet al-Bakri hospital, and how they made a union across all grades of staff, and not just for the doctors. We’re a large hospital with many different professions: doctors, nurses, admin workers, psychologists, social workers. There are around 1000 staff. We might all have specific demands but we all are working in the interests of the hospital, as the campaign against the closure of the hospital proved. It is the same story, really. If the nurses have a problem, I can’t just say ‘It’s nothing to do with the doctors’ because I work with them, whether its an issue about the nature of the work, or pay. In a lot of cases we’re talking about the general interests of the hospital.

So from April we were working to explain to people what the independent union meant. We did debate whether to use the existing union committee, but we decided to found an independent union. Problems began to increase with management, and during the first week in Ramadan we had a sit-in inside the hospital demanding the dissolution of the existing management. After discussions and negotiations with the management and with the Ministry of Health, a new manager was appointed from among candidates we had put forward. We’re still at stage of establishing the union, gathering signatures and signing people up. The thing we’re trying to get across to our colleagues among the doctors and the other staff is that the union is not like the management of the hospital. We do have a problem with this, because people are afraid that the independent union won’t really defend their rights and will be just another arm of management. So this is what we’re working on, to convince them that we stand up to management, and that the independent union officials are elected democratically.

When it came to the doctors’ strikes in May 2011 we already had a group of activists organised through the Doctors Without Rights network so it was quite straightforward to mobilise support. I and my colleagues in the Higher Strike Committee were organising the strike across the whole country, and other colleagues were organising the strike in the hospital itself. We had a big group of activists involved and our strike was 100 percent solid, no-one broke the strike.”

Medics for Tahrir: a matter of life and death in the ‘field hospitals’

Volunteer medical workers have risked their lives many times to help protesters injured during police and army attacks on Tahrir Square. Dr Rania Fouad, a recently qualified doctor was working in one of the makeshift field hospitals treating injured protesters near Tahrir Square on Tuesday 22 November when it was attacked by the police with tear gas. She passed out from inhaling the gas and according to eye-witnesses the police then prevented her companions from reaching an ambulance and she later died.

This is part of the MENA Solidarity Briefing: “Egypt in Revolution: Women workers speak out”. Read more by clicking on the links below

Introduction
‘Here are the women’
Building the Independent Unions
Teachers’ unions build unity from below
Revolution in the hospitals: ‘The independent union knits everyone together’
Women on the frontline of protest
Media workers fight to clean up state TV

To order hard copies of the briefing email menasolidarity@gmail.com
Get involved with building solidarity: find out more here

2 thoughts on “Egypt: Women workers speak out – Our strike was 100 percent solid”