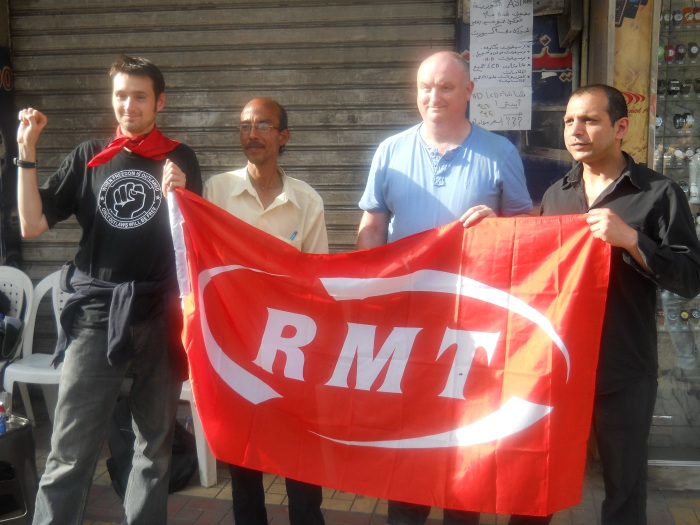 Unjum Mirza (right) and colleagues from the RMT met Mohamed Abd-al-Sattar from the Independent Union of Public Transport Authority Workers in Cairo, May 2011

On behalf of the London Region of the Rail, Maritime and Transport union, I want to send greetings and solidarity to our brothers and sisters in Egypt who are protesting against the draft constitution. We are particularly concerned by the attacks on workers’ rights announced by Mohamed Morsi in his recent speeches and affirm our solidarity with our colleagues in the workers’ movement in Egypt in their struggle to build strong, independent unions to win workers’ rights and lead the fight for social justice.

We send our greetings to our colleagues in the Independent Union of Public Transport Authority Workers, and to colleagues in the Cairo Metro. Your recent strikes have shown the power workers have when they are united. In Britain we’ve been inspired to hear how our transport worker colleagues in Egypt have been fighting not just for better pay and conditions but on behalf of passengers for better public transport services. This is why the right to organise unions and strike should be supported by everyone who believes in social justice. We were concerned to hear that the leaders of these strikes faced arrest and interrogation.

We’ve learnt from you that the struggles for bread and freedom cannot be separated.

Our government, which backed Mubarak’s dictatorship, wants workers in Britain and Egypt to pay for the crisis of capitalism. Here we face huge cuts to jobs and services. In Egypt, the IMF deal supported by western governments and signed by Morsi, will force millions deeper into poverty.

We are confident that Egyptian workers can win the battles for freedom and social justice.
Victory to the revolution