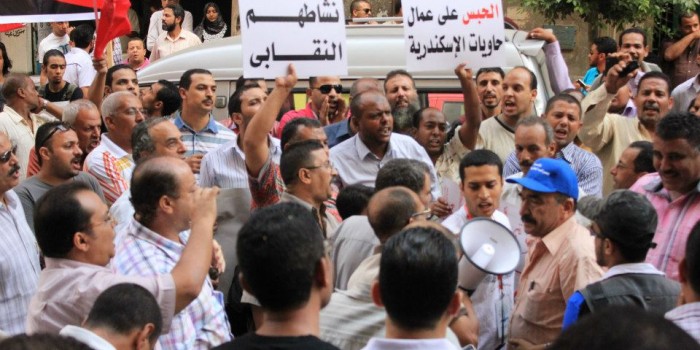 Workers from Alexandria Containers Company and trade unionists protest over the jail sentences handed down to 5 of their colleagues for leading a strike, September 2012 – picture via revsoc.me

Since the revolution of 2011 nearly 1000 independent trade unions have been created in Egypt. Under the old regime, the sole legal trade union was the Egyptian Trade Union Federation (ETUF), which was controlled by the state. The independent unions have been at the heart of workers’ struggles to realise the revolution’s demands of ‘bread, freedom and social justice’. Now independent trade unionists are facing a new wave of attacks from the Muslim Brotherhood government. Hundreds of activists have been sacked and victimised, and dozens hauled through the courts. In this article Egyptian workers and activists explain why they are fighting for a law on trade union freedoms and what is wrong with the draft labour law proposed by the Egyptian government.

What’s wrong with the Brotherhood’s law?

“A law on trade union freedoms covers everyone’s rights to organise: workers, farmers, professionals, fishermen, service workers, homeworkers, temporary and seasonal workers. But the Brotherhood’s law bans our civilian colleagues in the police and army from their right to form unions to defend their rights, although they are among the people who need unions the most.

We want unions, not the federation to have full rights to negotiate and take the decision to strike. Workers themselves are the decision-makers. They must be able to elect their leaders freely and exercise authority over them.

In the Brotherhood’s draft law workers who leave the ETUF affiliated general unions will lose their deposits in their retirement funds. In the draft law the employer can ban workers from trade union activities and from organising elections (clause 30) because trade union activities and elections are only permitted “if they do not affect the course of work in the institution”.

Clause 39 imposes a fine of 10,000 Egyptian pounds on trade unionists for ‘spreading false information’. By contrast employers who sack workers for trade union activity only have to pay a 1000 pound fine. The law allows the Ministry of Labour to intervene in trade union affairs. We want to reduce the Ministry’s role to the minimum, because we know that the Ministry always used to interfere in union elections by forging the results in favour of the people the government and the security forces wanted to get elected.”

Five workers for the Alexandria Containers Company were sacked from their jobs and sentenced to 3 years in prison in September 2012 after leading a strike against corruption in the company. Over 400 workers in 24 different workplaces have been sacked for their trade union activities over the past year and a half. These include more than 50 workers in the General Tax Authority and the Sales Tax Authority who were sacked for blowing the whistle on corruption. In another example of mass sackings, 1560 workers from the state petroleum company Petrojet were sacked during the revolution and the company has refused to take them back.

‘The courts are trying to intimidate workers’

We have seen a large increase in police attacks on striking workers in recent months. I am often called to represent workers who are being interrogated by the prosecutors following their arrest during strikes and protests. The right to strike is recognised in Egyptian law, so the prosecutors will use charges of criminal damage, assault or ‘aggression against the right to work’ against striking workers.

We have seen cases recently where courts have handed down prison sentences against workers in absentia. The aim is clearly to intimidate and frighten workers into dropping their demands. We are trying to build a strong movement in solidarity with workers who are arrested and victimised.

We set up our independent union after the revolution. We collected signatures from colleagues who wanted to join and began to get organised. But management fought back and threw a lot of false accusations against us. They accused us of causing riots and criminal damage. Then management tried to buy us off, they failed because we were united. After the revolution, a new minister of water was appointed and he was someone from the old regime. The first thing he thought of was raising the price of water for people. The independent union was against this completely. We are standing with ordinary citizens and fighting for their right to clean drinking water in their homes. Our campaign was successful and the minister withdrew the price rises.

“Workers in our industry have nothing”
Ibrahim – Building Workers Union

Workers in our sector have nothing – no social insurance, medical care or employment rights like government employees, for example. Many building workers used to travel abroad to work and there was a scam by companies which would take money equivalent to half a years’ salary from workers in order to help them travel, then they would be working essentially as slaves until they repaid the debt. Workers who had an accident at work would be left penniless and their children reduced to begging. Before the revolution a group of us asked the government for permission to set up a social fund for building workers but this was refused. Then came the revolution and a lot of us were involved. We organised an independent union, but the battle still goes, because we do not yet have a law on trade union freedoms.

What you can do

One thought on “Egypt: “Trade union rights are our way to social justice” – new leaflet”