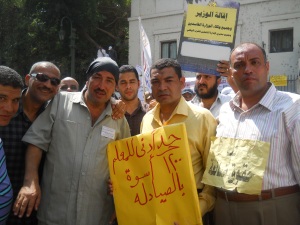 As the new school term starts across Egypt tens of thousands of teachers are on strike.  They are demanding:

As part of the emergent independent trade union federation their organisation is a popular and democratic movement from below, seeking unity with the communities they serve. Teachers want a properly-funded education system for all Egyptian children, not just those who can afford private tuition.

Yet like their striking brothers and sisters in textile, sugar, shipping, post, transport, civil service and health industries, Egypt’s teachers face the wrath of an army council which outlaws their words and deeds. According to Egyptian human rights groups, up to 12,000 civilians have been jailed after military trials since the revolution began. Officials in the new independent teachers’ union said on Sunday that striking teachers were facing harassment from the security forces.

Egypt’s teachers now deserve explicit international solidarity from everyone who has welcomed the Arab spring.

To add your name, email menasolidarity@gmail.com or send your own message of support via the Egyptian Federation of Independent Trade Unions eiuf2011@gmail.com