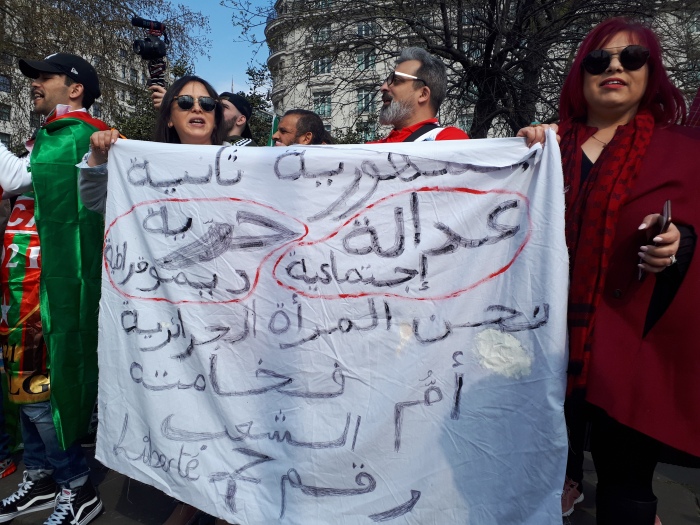 “Social justice, democratic freedom: we are the proud mothers of the people” – Algerian activists protest in London

For the sixth week in a row, hundreds of Algerian activists from around the UK joined lively protests in central London in solidarity with the unfolding mass movement in Algeria. After rallying at Marble Arch, they marched down Oxford Street flanked by a convoy of mopeds carrying banners and Algerian flags.

Crisis has gripped the Algerian ruling class since protests erupted in February in protest at the decision of ailing President Abdelaziz Bouteflika to stand for a fifth term in office. Following weeks of huge demonstrations and strikes, Bouteflika has said he will not stand again, but remains in office, naming a new cabinet on Sunday 31 March.

Middle East Solidarity spoke to organisers of the London protests, Linda and Rabia, about the demands of the movement in Algeria and the goals of the weekly demonstrations in London.

“We have no political or financial links to any side, we are completely free, we are the voice of the people in Algeria”, Linda explained. “They want the corrupt system to change, and we are helping them to organise peaceful protests.” Demonstrators in London are closely following the movement on the streets of Algeria over social media, and adapting their slogans as the movement in Algeria develops. “The demands are changing depending on the political situation”, Rabia said. “For example on 22nd they were protesting against a fifth term for Bouteflika, then on the 3rd they were demonstrating against Bouteflika having another year in power, then we were saying we don’t want a government chosen by the government”. 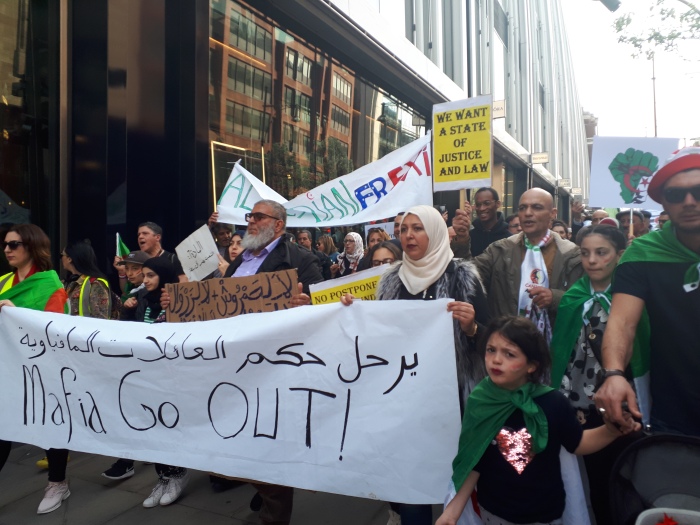 Protesters are insisting on maintaining unity, despite attempts to set them against each other, Linda argued. “The government is trying at the moment to put something in the middle of people to divide them, because one is Berber, one is Arab, one is Muslim, one is not Muslim. But the Algerian people are very clever and we have so much experience that now it is like we have our PhD in this domain.”

Many Algerians are wary of the role of the army, Linda told us. General Gaid Salah, the Algerian chief of staff, is reported to be in favour of removing Bouteflika through a “medical coup”, relying on article 102 of the constitution which allows the president to be removed from office if medically unfit.

“It’s a big joke, Algerian people are awake and they are aware of what is happening, not just in their country but everywhere else. We have people who are corrupting the system going into the streets and protesting with us. We are not stupid, we understand that this is a game.”

Rabia is another of the volunteers who have given up every Saturday for the past six weeks to organise the London marches. He also told us that protesters didn’t trust the generals’ intentions.

“Last week, the general Gaid Salah said we need to use article 102 from the Algerian Constitution to remove Bouteflika on medical grounds, but this is illogical, why did they not apply it seven years ago when he first got ill? That’s why we are thinking that this general has some relationship with Bouteflika and all those people in power.

We are opposed to the generals intervening because we have experience from what happened before, in the 1990s. It was ten years of bloody terrorism and it was all caused by the army. They wanted to bring in a president of their own, they didn’t want the people to raise their voice, so that’s what happened. We don’t want another president from the military. We don’t want to have the same experience again. We want a civil state, we have had our fill of the military. There was a lot of blood, a lot of suffering. We will not accept that Algeria goes through that again.”

“Algerians are saying is everything needs to be changed from the top to the bottom. We need something fresh.  The largest percentage of Algeria’s population is young, and most of them are dying in the sea. Their mums are crying, because they want to go somewhere else where there is more freedom. We are not going to accept that happening anymore. These people are our brothers, they are our sisters. Algeria is a rich country. But people are very poor. Yet we have people in the government who own palaces and hotels and everything like in Europe. That’s why we are not going to accept that any more. And we are going to get back what was taken from us.”

European governments are complicit in looting Algeria’s wealth and collaborate with the corrupt regime, speakers on the protest argued. “French politician Marine Le Pen is a racist and fascist who campaigns against halal meat, but she’s happy to steal Algeria’s oil and gas”, one man told the crowd. Rabia also told us that the British and French governments are providing vital support for Bouteflika and his corrupt regime. “The simplest thing that people in Britain can do to support us is to call for the British government to cut off contact with the Algerian government.”

The headline on this article has been edited for clarity