Picture: trade unionists and activists protest in Cairo in solidarity with the rail workers, 10 April (via revsoc.me)

For the first time, the armed forces have blatantly intervened to break the train drivers’ strike – not by force, as in the past, nor through orders to arrest the drivers on charges of striking or incitement to strike (as has already happened to 16 drivers, 13 of them from Tanta), but by issuing call-up papers conscripting hundreds of drivers to work in the Armed Forces’ Transport Directorate. The drivers received orders from the Central Agency for Public Mobilization and Statistics which stated that “it had been decided to assign them to work in a military capacity for the Armed Forces under the Transport Directorate”. The letters stated that drivers who delayed in reporting for duty at the specified place on receiving their assignments would face a six-month jail term or a fine of 5000 Egyptian pounds [£500] or both.

To add insult to injury, when the drivers reported to the mobilization centre for Railway Battalion 39 at Masr Railway Station near Al-Sharabiyya Housing, they were suddenly detained, after negotiations between them and representatives of the security services broke down. The drivers called for the cancellation of the orders but this was refused and they were told that the Minister of Transport had refused to take this action. Then the drivers were banned from leaving and they were left without food or drink from the morning of Tuesday 9 April until the time this statement was written.

As for the Egyptian government, rather than thinking about how to implement workers’ demands, which are the genuine expression of social justice, one the fundamental slogans of the revolution, it has spent two years experimenting with new ways to try and break the movement. Sometimes it smears the workers, claiming that they are exploiting the revolution for their own sectional demands, and at others it uses all forms of victimisation including dismissals and imprisonment on charges of striking.

Despite creating an arsenal of laws criminalising strike action, protests and sit-ins the government has failed to break the workers’ movement by stopping workers’ peaceful strikes and sit-ins to defend their rights. So now it is resorting to illegal imprisonment, for neither the army or the government has the right to conscript anyone, in particular if they are over 35 years old, except in specific circumstances such as war-time. In these situations, the President of the Republic has to issue an order for general mobilization, which has not happened in this case. What is happening here is an attempt to terrorise the drivers from exercising their constitutionally-enshrined right to strike by prosecuting them under military law.

The signatories condemn this attempt to militarize the railway, and to terrorize Egyptian workers and the train drivers. We declare our complete solidarity with the drivers’ just demands for their rights. We demand the right for Egyptians to a safe public transport system and to exercise their right to strike. We call on the Egyptian army not to intervene in the workers’ movement, and demand that the Egyptian government takes action to solve workers’ problems and implement their demands, which have long been considered to be fair, rather than attempting to break their movement. 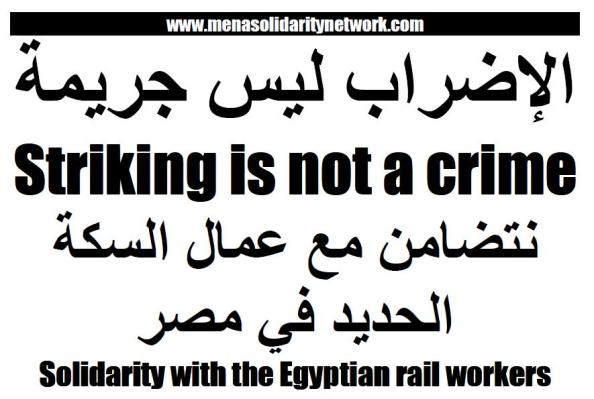